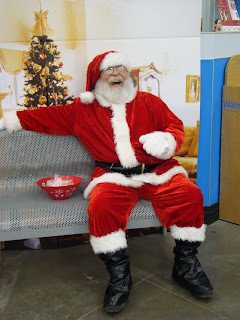 My mother made Christmas a stellar event when my sister and I were young.  She purchased and/or made numerous gifts for us (and kept track of every cent she spent in order to be "fair"), decorated the house, cooked a delicious meal and made the day very, very special.  Rarely did anyone get drunk (unless it was me), and I don't remember even one nasty fight occurring on a December 25th.

If I shut my eyes today and follow my memory back to, say, Christmas of 1975, I feel warm, cozy, loved, safe, and happy.  I look around the memory room and see my father in his recliner (with a beer), my mother in the kitchen (with a gin and tonic), my sister and her first husband (they were trying to get pregnant and I can hear her squeal with glee upon opening a box containing a check that would pay for one infertility treatment), my first husband (whom I subsequently divorced about a year before he died desperately young at 23 years of age) and the family poodle, Trinka, preparing to beg at the table.  Trinka did love her turkey.  As a matter of fact, that year she managed to climb onto the kitchen counter after dinner and before the dishes were done to pick at the turkey carcass.

I remember this because that one year we happened to tape record "The Opening".  The opening was the lengthy process of  each person receiving one gift taken from under the tree while everyone else watched, and it was always fun. I could hear the Christmas carols playing in the background.  I had that tape and listened to it a number of times as an adult before losing it somewhere during the depths of my alcoholism (not surprising as I actually misplaced a clothes washer and dryer during the same period of time - I honestly cannot remember where those appliances went during one of my frequent moves).

Somewhere in my thirties it came to me that once I left home I was disappointed every Christmas.  My father was dead, my mother was involved with a man I despised, I had been married several times, had no children, my sister lived far away, and what was left of my family of origin rarely got together for Christmas.  When we did, Mom was difficult to deal with, her partner was a raging asshole and had to be the center of attention, and I was drunk or stoned (and disappointed).

Somewhere in my early forties I began exploring Buddhism.  I was sober by then and searching for a place where I fit spiritually.  I was also married to a man who doesn't remember birthdays or anniversaries (he just doesn't) and likes to hold on to his money (which is probably a good thing because I seem incapable of holding on to mine).  I always have a Christmas tree, though, because I love the lights and  inherited some gruesome family ornaments that remind me of Christmas of 1975.

This year, my husband was asked to play Santa at Walmart, where he works.  Walmart is a pretty big deal here in the town of Kenai, Alaska, and I try to be supportive of him in his workplace because he has always been supportive of me in mine.  On the Santa day, I actually put on some makeup, tried to tame my hair a bit, and donned a red scarf before grabbing my camera and making the icy drive to Walmart.  I got there shortly after the Santa event had begun and started taking photos. 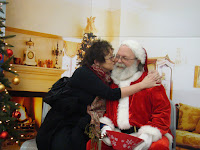 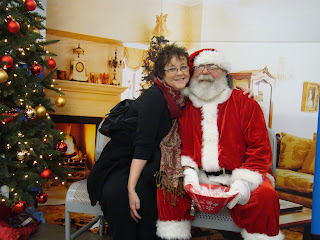 As I watched my husband interact with children (he has perfect Santa facial hair - that bushy white beard that I'm always nagging at him to trim) I found myself smiling.  I took photo after photo.  The cute little Native Alaskan kids, the cute little black and white and Asian kids, the kids who cried, the kids who had to be coaxed, the kids who handed Santa crumpled, carefully (and illegibly) written gift lists.  Those kids looked at him like he was really Santa.  My heart warmed and warmed until it felt like I had Christmas music playing in the background, my mother in the kitchen, my father in his recliner, my sister, a turkey in the oven, Trinka begging for treats, and a big Christmas tree loaded with gifts around me.

This year, my husband gave me the best Christmas gift I have ever received, and one I could not have imagined possible.  Thank you to my dearest, long-bearded, thrifty, stubborn, funny, smart, supportive, genuine, honest, quirky husband Santa.  You returned to me the joy of Christmas.
Posted by 1NurseRatched at 1:46 PM

Email ThisBlogThis!Share to TwitterShare to FacebookShare to Pinterest
Labels: Christmas