I bought a new bicycle three months ago.  When I was choosing between two models, I told the salesman that I wanted to "go fast", and he sold me a bike that I've been riding (obsessively, just like I do everything else) since then.  Although I am by no means a "cyclist" proper, I talk to people about biking now.  Everybody.  Most of them ask, "Have you ridden "The Loop yet?"  Until today, I had to say no.

"The loop" is a route that takes a rider across the Kenai River up one side between Kenai and Soldotna, and then across it again down the other side.  Without shortcuts, it's 24 or 26 miles, depending upon who you're talking to.

By the first of July my goal was to ride the loop before I left for college in Anchorage on the 29th of August.  I was riding 12 miles or so per biking session by then.  By the end of July I had ridden a round trip of one leg of the loop (19.2 miles), including three gnarly hills each way.  Gasping for breath and sure that my heart was going to pop out of my chest, I might add.  I continued "training" for the goal.  I could see muscles bulging in my thighs and calves, and my rides ranged between 11 and 20 miles, several days per week (whenever weather permitted).  By two weeks ago I was sure that I could handle the 24 or 26 miles and the three gnarly hills, but was afraid to ride the first leg of the loop: a three mile stretch of busy highway with no bike path - just a bike lane along the shoulder.  That leg crosses the "flats" that flank the Kenai River, and is close to the mouth where the river feeds into Cook Inlet.  I had been told it's "always blowing" there and was reluctant to take the plunge, so to speak.

I am a goal seeking old woman.  Today (the 28th of August) dawned sunny and still.  I strapped on my (new) helmet, (new) biking gloves, charged my iPod and made sure I had plenty of water.  Here's what I found.

Had I been too afraid to ride the first leg, I'd have missed this view (that peak in the background is Mount Redoubt, an active volcano that's part of the peninsula that eventually becomes the Aleutian Islands): 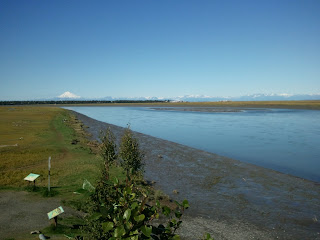 Without riding that leg, I would have missed the llamas at the ranch.  I love those llamas and it was wonderful seeing them close to the fence that divides their domain from the bike path.

I'd have missed smiling and nodding at other cycling individuals, couples and families I passed along the way.

I'd have missed this view of the Kenai River as it slices through the town of Soldotna: 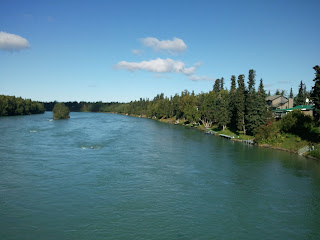 I'd have missed running into (not literally) my former Chemistry professor (a truly admirable and brilliant man who also has a sense of humor) as he made his way along the loop in the other direction.  He had been one of the people who asked me if I had ridden the loop a couple of months ago.  He had also given me pointers as to how to tackle the first leg.  It was delightful to see him, and he "high fived" me when he heard that today was my first attack on the route.

Most importantly, I'd have missed achieving a goal had I allowed my fear to stop me.

My butt is still numb and my legs are a little wobbly, but MAN do I feel good.  Not only that, I promised myself that I would have ice cream tonight if I burned off enough calories by riding 22 (according to my odometer) today, and I'm looking forward to that.

What would you do if you weren't afraid to try?

Three years ago tonight I was with my husband in a hotel room in San Bernardino, California.  My sister and her husband were staying in the room next to ours.   The four of us and my nephew Russell had just said a final goodbye to my mother who died on August 26, 2008 at 5:26 pm.

My mother's death had been expected, still, when I saw her shortly after she drew her last breath I was overwhelmed with the finality of it all.  She had been the central figure in my life in spite of the fact that I had five husbands while she was living.  Orphaned by the time she was 18, she spent her life searching for security; she married my father who provided her with financial stability, and she settled on having me as her emotional support, her "brick".  Her touchstone, so to speak.  This was an unhealthy burden to place upon a child, but she didn't know that.  Having had no training in parenting, she did what seemed right to her, and my childhood was sacrificed in the process.  She did the best she could with what she had.

I'm no saint.  I was a wild teenager and adult, and terrified the family with my reckless lifestyle and drug abuse.  Even so, save for periods of time during which my mother and I "weren't speaking", I was her "best friend".  We fought and traveled together and shared holidays.  We spoke nearly every day on the phone.  In her eighties she moved from the coast to a house we bought in the mountains, where she lived with my husband and me for 18 very difficult months.  It's hard having two strong women in one household.

When it counted the most, I was there for her.  The last two years of her life were very difficult for both of us, and for my sister.  My mother's decline was painfully obvious, and she made repeated trips to emergency rooms, finally settling in a nursing home.  I worked for the company that owned the nursing home and knew the staff well.  They gave her good care in spite of her refusal to do anything at all for herself.

It was always all about her.

Three years ago tonight, she set me free.  I moved thousands of miles away from the hot, crowded, stressful place in which she had chosen to live and began to live my own life for the first time.

This morning I drove to a neighboring town for a haircut.  I walked into the salon and the woman who cuts my hair advised me that she was running late as she was working with an old woman who wanted a perm.  I saw the old woman with her thinning gray hair and watched as she carefully moved from a wheelchair to the beauty parlor chair.  At one point the woman turned to look at me and I saw my mother's face.  The woman smiled at me and tried to speak.  She had difficulty expressing her thoughts; I suspect she was recovering from a stroke.  I felt tiny tingles move up my back and down my arms when I looked at her.  Later this afternoon I rode my bicycle for 20 miles in the late summer Alaska sun, and I saw my mother again, in the sky.  When I see her these days, she is usually the sun peeking through clouds.  I can see her, and feel her, and she is beautiful.  She is smiling at me, cheering me on.  She tells me that she approves of my decision to go to nursing school at the age of 55, that she is glad that I am eating better, and that I'm exercising.  She tells me that she loves me.

She also tells me that she doesn't understand why I left California and moved to this "godforsaken" place.  It is then that I laugh and say to her, "My life, my choices."

When we moved into this rental last spring I found the raspberry plant burial ground my landlord had told me was on the property.  On the west border of our backyard is a weathered, falling-down fence, at the base of which were knobs of raspberry plant roots that had been repeatedly mowed to the ground.  I love raspberries and decided that I was going to cultivate those knobs.  By August of 2010 I had weeded and fertilized and watched as 10 to 12 hearty canes, some up to 6 feet in height, enjoyed the Alaskan summer sun and flourished.  I'm not a farmer and didn't know that raspberry plants don't flower and produce fruit their first year, and when my cousin's husband gently advised me that I wouldn't see fruit until this summer I was gravely disappointed.

Winter came and with it snow that at times completely concealed my raspberry patch.  I found a job and completed my prerequisites and applied to the nursing program, to which I was accepted.  Spring came relatively early this year and shortly after the last patch of snow disappeared, tiny leaves appeared on last year's raspberry canes.  I watered, fertilized, and weeded, and within a short period of time (thanks to those long Alaskan summer days) the canes were bushy and green.  One day I was examining my crop and noted that there were what looked like tiny flowers opening on the plants.  I rushed into the house and asked my husband to look at them and tell me what they were.  He told me that they were blooms, and that those blooms would produce fruit.  He's not a farmer, either, but he laughed at me when I looked surprised.  "You mean they make flowers first?", I asked.  That made him laugh even harder.  I grew up in condos and have never paid attention to yards; in fact I mowed a lawn for the first time just weeks ago.  How was I supposed to know?

After the flowers came tiny green raspberry-shaped objects.  I waited.  The sun shone and rain came.

For two consecutive mornings in a row I have eaten raspberries for breakfast.  They are ruby red and sweet and delicious not only because raspberries are empirically delicious, but because I nurtured them a little and allowed them to grow.

What once were withered knobs are now healthy plants bearing rich fruit.  Kinda like me.  What once was a worn out alcoholic woman is a mid-middle aged nursing student embarking on longest-sought, most exciting journey of her life.  As the rock group Queen put it:

Just me and my little old raspberry bushes.