For as long as I can remember I have wanted to raise chickens.  It wasn't practical (or possible) when I lived in southern California (36 years).  Either I lived at the beach - no chickens allowed - or in the mountains in houses perched on the sides of steep drop-offs.  No room, or time, for chickens.  I lived in Alaska for five years after leaving California. Nursing school and sub zero temps prohibited me from interacting with any chickens other than those I found in the meat section at the local grocery store.

Now I live on my sister and brother-in-law's property in the greater Seattle area.  My husband and I parked our 34 foot motor home behind their house over a year ago and we haven't moved it since. Linda, my sister, and Art, her husband, have a house on a nice sized chunk of land.  They have created a large garden where once was grass and this summer I have taken care of the fruits and vegetables growing here.

Several weeks ago, we began to "talk chickens".  The people next door and those who live across the street have chickens.  I say God bless the zoning laws in this area.

Art and my great-nephew Kyle tore down an old play area in the yard and began the arduous task of constructing a coop.  They used the wood that had been a sort of playhouse to build the coop.  Art can build ANYTHING, eyeballing the space and imagining the finished project.  They worked tirelessly on 90 degree days, hammering and sawing and, occasionally, swearing.  On the final few days of construction my husband stepped in and helped.  Two days ago I knew that what has grown to be"a deluxe chicken townhouse" would be ready for occupancy today.

I drove home from work this morning and realized that I was very, very nervous.  A dear friend and I had made a date to drive to "the chicken store", and she and I left at 10am.  When we returned home at noon, we had 50 pounds of special feed, a bag of "grit" that chickens need to digest their food, a large plastic contraption to hold water for chickens, a bag of probiotics to add to the water, a large bale of chicken bedding, a block of something that actually smells good and is a concoction that serves as "chicken treats", and a special feeding container.  We also had six three-month-old chickens tucked into a large cat carrier.
I had planned to purchase breeds of chickens that are good egg-layers.  I was going to buy two of each of two breeds.  I ended up buying those four and two that were too pretty to pass up.

My chickens spent the day getting used to their surroundings and digging up items including a very, very old empty pack of cigarettes.  They pecked and chatted with each other and dug and rolled in dirt and ate and drank with great vigor.  Then it came time for me to introduce my girls to their coop - an insulated (thank you, Art) haven at the top of a long steep ramp.  My chickens were not amused.  They were perfectly happy digging for cigarette packages.  There was considerable chasing and dodging involved, but I managed to get all six chickens into the coop where they paced and pecked at the walls, wide-eyed and skittish.  I stood at the coop opening and talked to them in a low voice until they settled down and then I began to pet them.  One of my Rhode Island Reds actually fell asleep with her head on my hand as I gently stroked the feathers on her back.  It's dark now, but I'm fairly certain they're all asleep now, perhaps dreaming of the eggs they will lay in that coop.

And I have placed a check mark next to one of the items on my bucket list, one that I was pretty sure I'd never achieve.  Life is full of surprises, and some are wonderful. 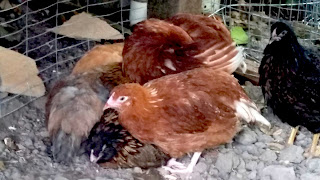 Posted by 1NurseRatched at 8:56 PM