A rose by any other name...

Eight days ago my six chickens came to live with us.  They have all been named - in spite of dire warnings from people who eat their chickens after they stop laying eggs.  "Don't name them or you won't be able to eat them", they said.  I named three of them that first day.  Within a week, they all had monikers based on appearance, personality, or personal request from friends.  None of them will be eaten.  I'll have to open a chicken hospice at some point, because nobody is going to eat my chickens.

Mamba is the dominant.  She calls the shots.  She is the smallest of the bunch, has one toe that is crooked, is black with some lovely dark brick colored markings, and can control the others with a couple of rapid pecks to a head or neck.  Shiela is the least dominant.  She is solid blonde, very pretty, and named after my boss.  I'm not sure how my boss would feel knowing I have named a chicken after her and can only hope that she doesn't spend time reading blogs or facebook and find out that way.  I might have some explaining to do.  One of my two pretty Americauna breed chickens is named Marge, after my mother.  Marge screamed bloody murder the first time I picked her up.  This chicken has a set of lungs on her.  My mother could astonish her two daughters with the decibel levels of her admonishments, so it seemed only right that she be remembered, and honored, this way.  One of my Rhode Island Reds is named Rhoda.  The other Red is named Mary Jane at the request of a friend at work (whose name is Mary Jane).  The second Americauna is named Winnie after Winnie the Pooh.  My sister chose that name.

I love my chickens.  After two nights of being carried to their coop (after much chasing, peeping, pooping, squawking and wing flapping) and three nights of being restricted to their condo, they now know where they are supposed to sleep.  They do not file sedately up the ramp to the door of the coop.  They wander in and out, pecking at each other and pushing each other out until they finally settle down.  The peeping and jostling for position ceases after 15 minutes or so and then I unplug the overhead light in the coop so my girls can get some sleep.  They need their beauty rest for days spent pecking, scratching, grooming, digging, leaping straight up into the air, chasing each other and pooping everywhere.  They're delightfully entertaining.

And now, it's time for bed. 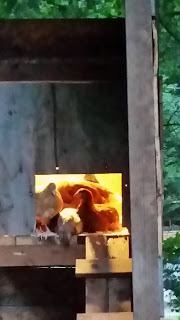 Posted by 1NurseRatched at 9:21 PM